Since 2013, TransGas has been working with Brazil in the development of a clean coal gasification project.

Brazil is one of the most promising energy markets in the world. An emerging superpower with a diversified and robust economy, Brazil has seen its energy consumption double in the last two decades. The growth in the energy sector is impressive. Even amidst a scenario of global crises, Brazilian industries now consume 80% more electricity than in the mid-1990s.

The significant increase in energy consumption has been led by the Northern, Northeastern and Central-Western regions of Brazil, which have been going through a decade-long period of impressive economic revival, industrialization and poverty reduction. The Northeastern region, once poor, now possess one of greatest potentials for massive energy infrastructure investments. Its 2013 energy consumption grew by almost 6%.

The energy market expansion will affect all sectors. More super-giant oil fields have been discovered in the South American giant nation over the last ten years than in any other country.  Oil production is estimated to rise from 2.2 mb/d in 2012 to 4.1 mb/d in 2020 and to 6 mb/d in 2035, making it the world’s sixth-largest oil producer. Natural gas production will grow strongly, reaching more than 90 bcm by in the 20 years. Brazil’s production of biofuels will expand more than 300% to 1 million barrels of oil equivalent per day in the next decades.

Fertilizers for the future breadbasket of the world

Brazil has unique comparative advantages in the agricultural sector: abundant, omnipotent rivers, ideal tropical and subtropical weather conditions, and intense Equatorial sunlight. It has the potential of being able to produce 40 percent of the world’s incremental grain demand between 2020 and 2050. The only obstacle in Brazil’s path is the lack of fertilizers.

Currently, Brazilian farmers use only one third of the amount of fertilizers of the United States, the European countries and China. In 2013, Brazil used the same quantity of nitrogen fertilizers that was available to all farmers of India – in the year of 1990.

They do not use more fertilizers because the country produces only 21 per cent of the nitrogenous fertilizers currently applied. Consequently, farmers need to rely on imported fertilizers that are very expensive and have extremely volatile prices, affected by exchange rate volatility, the global oil market, Middle East instability, the Iran deal, so on and so forth.

Importing 79 per cent of the so precious urea for the production of corn, coffee, sugar cane, cotton, rice, wheat, and beans, among others, is a factor of growing vulnerability to Brazilian farmers and the overall Brazilian economy.

Because fertilizers correspond to a margin of 20 to 40 per cent of the production cost of grains, the dependence on expensive imports ends up leading to higher production costs, more expensive food and more inflation in Brazil.

Since 2013, TransGas has been working with Brazil in the development of a clean coal gasification project that will employ the vast, underutilized open-pit coal reserves of Southern Brazil as feedstock to produce high-quality urea in an extremely clean and cost-effective manner.

Adam Victor at a Coal mine in Rio Grande do Sul, Brazil 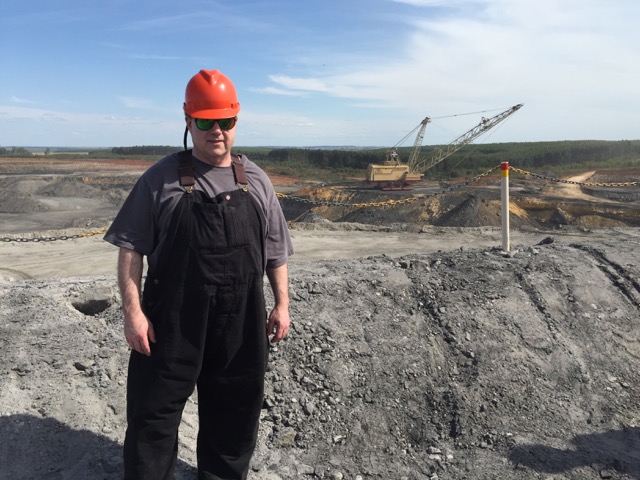